A DCR operation can be performed in 2 different ways, with or without a scar, called External or Endoscopic DCR respectively.

This is an operation to form a new tear drain between the eye and the nose, when there has been a blockage. During a DCR, the tear drainage passages are opened, removing a very small piece of bone from the side of your nose, so that the tears can drain into the nose.

In an endoscopic DCR, your surgeon can get to your tear duct by going up through your nose using special instruments.

Call or email us today, we would be delighted to answer your questions

What does the DCR surgery involve?

In an external DCR your surgeon makes a small cut through the side of your nose (where a pair of glasses would rest), to get to your tear duct. This heals up very quickly and in most people is nearly invisible after removal of the stitches, (generally b/w 7-10 days after the operation). There might also be small polythene rods (often misnamed as “tubes”, although they do not assist with drainage), which are positioned to keep the newly made passages open. These will be trimmed (on the ward) before you leave. The rods might be visible just inside the nose, but don’t worry if they are not visible after surgery; the rods will be removed in 3-4 weeks at an outpatients appointment. They are tied inside the nose and a loop can occasionally protrude from the inner corner of the eyelids. If this happens the soft polythene rods can gently be pushed back into place. 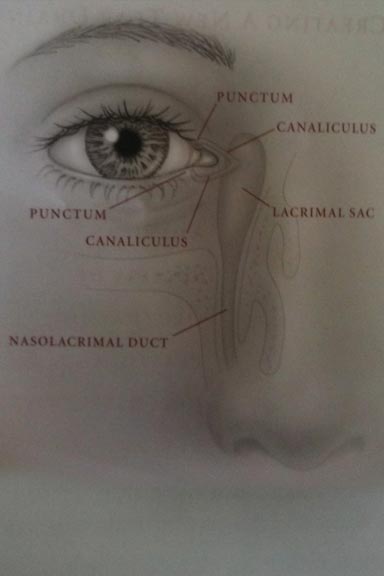 What type of anesthetic is necessary?

The operation takes about an hour and can be performed under a general anesthetic where you are asleep, or under local anesthetic with sedation. With a local anesthetic, the nose is “frozen” using an injection, which will sting for about half a minute.

You should not feel any discomfort during the surgery. You might hear some noise for two to three minutes as the bone is being removed, but this is less noisy than a visit to the dentist.

If you are an older patient and having a general anesthetic in the afternoon, you might be asked to stay overnight, but most younger patients can go home later the same day.

What happens after surgery?

After the operation you might experience some blood stained ooze from the nose. This usually stops after a few hours. If there is bleeding apply an ice pack to the bridge of your nose (on the opposite side to the dressing). Wipe away any bleeding with a paper tissue/kitchen towel. If the bleeding is severe or continues for more than half an hour, seek medical advice immediately by calling your consultant or attending  your nearest accident and emergency department.

If you experience pain, which is unusual, take paracetamol or codeine (not aspirin or ibuprofen for two weeks as this could cause some bleeding). In order to avoid drugs containing aspirin, please read the contents of the packaging of whatever painkiller you wish to use. It is usual to have a watery eye for some weeks after surgery until the swelling and inflammation settles, and the “rods” are removed.

Hot food and drink should be avoided for up to 24 hours after the operation as they can precipitate post operative bleeding. You may wipe your nose or sniff to clear it, but you must not blow your nose for seven to ten days. If you sneeze, try to keep your mouth open.

What are the main complications following a DCR?

Bleeding: A nose-bleed can occur up to ten days after surgery. This happens to about one in 50 patients. In most cases the bleeding will stop by itself, but if it continues or is very heavy you should attend the accident and emergency department at your nearest hospital.

Infection: This is rare, but a possible complication. When you leave the hospital, you will be given some drops to use during the day to prevent infection.

Scar formation: The incision on the side of the nose is usually small but might occasionally need to be massaged.

Blockage: Rarely, a scar can form inside leading to blockage of the drain again and require another operation. Sometimes, it might require surgical insertion of a small pyrex drain known as a “Jones tube”, which stays permanently in the tear duct.

What is the follow-up treatment?

You will be given a clinic appointment for one – three weeks after surgery. The stitch in your skin will be removed and the silicone rods might be removed from inside your nose at the same time or at another appointment. You will then be discharged. You will only need to contact your consultant if you experience any further problems.